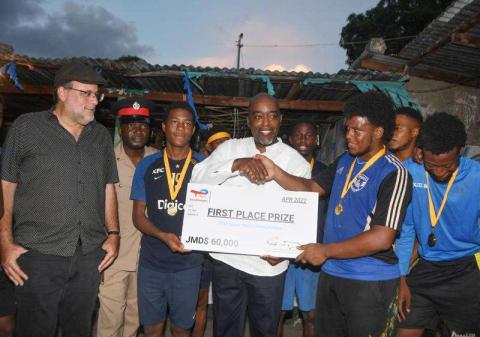 Programme Launched To Empower Children To Be Safe On The Roads 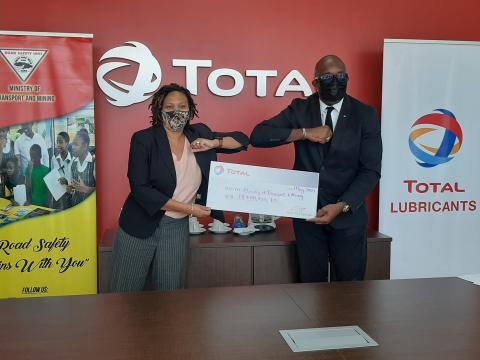 The Road Safety Unit of the Ministry of Transport and Mining, in partnership with TOTAL Jamaica Limited, has launched its annual Children Against Reckless Driving (CARD) programme.

Launched at TOTAL’s Hope Road Offices, in St. Andrew on Wednesday, May 19, the programme is geared at increasing awareness around road safety to reduce traffic crashes.

The partnership sees the Road Safety Unit executing a yearly campaign with TOTAL to educate and empower children across Jamaica, especially at the primary school level, about the need to be safe on the country’s thoroughfares.

Under the 2021 programme, the partnership will be extended to include the National Works Agency (NWA), to implement the refurbishing in some cases and construction in others, of several pedestrian crossings in high traffic areas across the island.

The first will be along Hope Road in the vicinity of Campion College and Total’s New Head Office.

Speaking at the launch, Director of the Island Traffic Authority (ITA), Mr. Kenute Hare,  said the Ministry of Transport and Mining is very pleased with the partnership that has been developed with TOTAL Jamaica.

He said that the corporate entity has been “very instrumental in supporting our Children Against Reckless Driving flagship programme.”

Mr. Hare pointed out that although it has been in the making for quite a while, it is good that the project is now at the execution phase.

“We are happy for the support and the commitment, not only to paint pedestrian crossings, but also to help us to enhance our road safety operations in the schools. The assistance to the National Works Agency and the Government and the people of Jamaica is profoundly appreciated,” the ITA Director added.

Mr. Hare said it was very refreshing for the launch to be done during the United Nations Global Traffic Safety Week, which is being observed between May 17 and 23.

For his part, Managing Director of TOTAL Jamaica, Mr. Christopher Okonmah, said that the entity is willing to partner with the RSU and the NWA on any initiative that they are doing that will bring about road safety for the children of the country.

“It is good we start from now to educate our kids on the need to respect road safety which is very important. We are available as TOTAL within the resources we have. We will always ensure that we support any initiative that you come up with or that we come up with and we also need your collaboration, in order to make sure that our roads are safe for us and for our children,” he added. 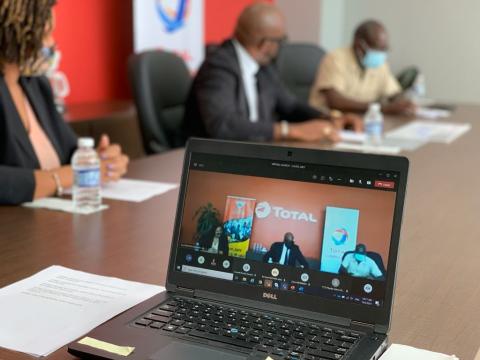 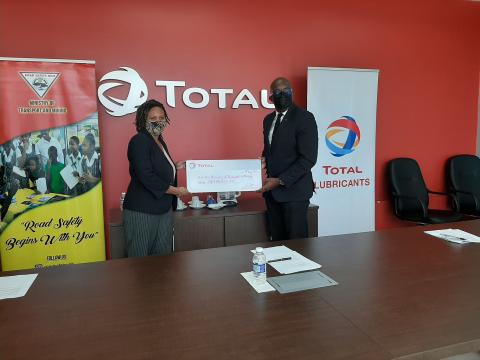 LISA Vasciannie, lecturer, international relations, and coordinator of the French-Caribbean programme at the Mona campus of the University of the West Indies (UWI), said the basic requirement to be considered for the much-sought-after Total Jamaica scholarship is for prospective awardees to be proficient in French. She could have jokingly added “petite”.

Samantha Powell and Gabrielle Buddoo, whose statures belie their ages, 21 and 22, respectively, were hosted by Total Jamaica at a Devon House send-off luncheon last Friday, as the pair of shy but focused scholarship recipients expressed their gratitude and looked forward to spending the next academic year at Sciences Po Bordeaux in France, courtesy of Total Jamaica.

Total Jamaica's new managing director Chris Okonmah's first official function in Jamaica was to meet, greet and bid au revoir to Powell and Buddoo as the French multinational petroleum company saw off its fourth pair of scholarship awardees since joining the programme as Bordeaux-year sponsor in 2015.

Powell, who attended Rusea's High, and Buddoo, a Holy Childhood graduate, completed their first year at UWI, Mona, and will move on to Bordeaux before returning briefly to Jamaica, then onto Martinique for their third year, en route to acquiring a master's in political science and international relations, years four and five completed in France and Jamaica, respectively.

Okonmah, who presented the young women with their bursaries, said Total Jamaica was again pleased to partner with UWI to help two Jamaicans live their dreams of studying abroad, without the burden of expenses on their slender shoulders, adding that the company also has other initiatives for industrious young people.

“One of the problems we have in the world today is that people have education but not skill. We have a Startupper Programme coming in which we will encourage a competition for youths, below 35, to think of something ingenious, as entrepreneurs, to present to a panel of top CEOs. It is part of Total's desire to support the socio-economic development of all countries in which we operate.

“We also have the Young Graduate Programme where we interview and recruit young graduates. If selected, they work within Jamaica for six months. Should they do well, we send them off to another country, anywhere in the world Total operates, to work for a year, to acquire skills they can use in the future. Upon completing the year abroad, should there be an opening that matches their skills then we would be open to retaining them” he added.

Tafar-I Williams, who, along with Janique Crosdale, was a 2017 recipient, joined senior management of Total Jamaica at the luncheon. He implored Powell and Buddoo to immerse themselves in French culture.

“My experience of the programme has been a fulfilling one, wholesome, character-building,” said Williams, who is gearing up for his third year in Martinique.

“One of the most important things is immersing yourself in the culture. I have encouraged them to do so because France is a bit more bureaucratic than other European countries so you have to learn the processes and the language. My French is now at a sustainable level and I owe it all to this programme,” he said.