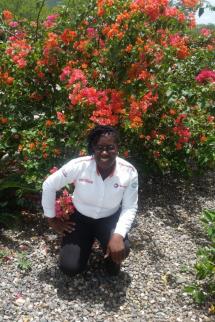 Clarendon Park Service Station is one of the largest and most productive stations in the TOTAL Network; On a Lucky day, you will surely glimpse or meet Christine Morgan, the service station’s Assistant Supervisor. Self-described as a strict role model, Christine, or Ms. Christine as dubbed by her team, is small in stature but huge in personality and has a great history with Total Jamaica.

Mother of four and Grandmother to two, Christine has been working with Total Jamaica since 2013. After answering an advertisement, Christine found herself starting out as a Customer Service Representative (CSR) and quickly rose up the ranks through dedication to her trade. Her ascent started, like many others, being trained by Robert Holdsworth the, now, COCO Manager. What defined Christine was how quickly she absorbed the material and how efficiently she was able to execute her tasks. This did not go unnoticed as she was barrelled through promotions, from being CSR to Office Assistant and then to her currently role, Assistant Supervisor, all by the summer of 2014.

To date, Christine has trained numerous incoming Supervisors, who now also rank among the best and work throughout the island manning high traffic and some would say challenging stations. When asked her advice to new TOTAL CSRs, Christine responds candidly “This is not an easy job, selling gas… it’s about service quality, making customers feel welcomed and ensuring that they want to come back.” She goes further to urge young CSR’s “when customers are not having a good day, just stay focused. Some will let you down and hurt your feelings, but by your good service, you will be able to lift their spirits.” And lastly and most importantly she says, “be honest, effective and punctual. Try to stand out and be an example to who may come after you.”

Christine; daughter, mother, grandmother and TOTAL Employee, gives us words to live by and embody in our daily lives, as she continues to impact lives through her position as Assistant Supervisor, we extend kudos and accolades to Christine Morgan, the TOTAL Package.